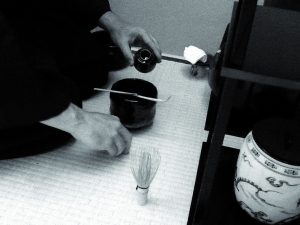 In Japanese culture the Way of Tea takes pride of place, for it assembles many of the traditional arts, crafts and disciplines: from architecture and garden design to ceramics, metal, lacquer and wood crafts all the way to the arts of brush writing, painting, food preparation and flower arrangement.

The Way of Tea has brought forth its own aesthetic which has in turn deeply influenced Japanese culture. It is often referred to by the terms wabi 侘び and sabi 寂 and characterized by a preference for asymmetry and imperfection, for simplicity and quietness, for earthiness and the unassuming, for the patina and dignity of the naturally aged. It shows profound respect for how things are in and of themselves and aspires to accentuate their innate qualities.

The preparation of tea itself can be regarded as a performative gesamtkunstwerk that as a whole points to something beyond the sum of its individual parts. The tea utensils, the calligraphy scroll, the flowers and the details of the ritual are carefully selected and prepared in accordance to the time of day, the season and the particular occasion. In the course of the tea gathering host and guest harmoniously collaborate to give meaning and life to its predetermined choreography.

In their choice of ceramics the early tea masters soon decided to temper the perfection of imported Chinese porcelain with the much rougher Korean and Japanese stoneware and Raku vessels. They particularly valued their organic distortions and simple iron and ash (deposition) glazes.

In the preparation of tea attention naturally focuses on the tea bowl (chawan 茶碗). The best tea bowls are regarded and revered like living people with an unmistakably unique individuality and a personal history. They are often given a name that refers to a seasonal mood, a poem, a historical event or a text from the Zen canon.

With all of its irregularities and asymmetries a truly excellent tea bowl still accomplishes the feat of emanating a beautifully poised serenity and unpretentious wholeness. Its seeming simplicity does not result from the ineptitude of its maker but represents the “beginner’s mind” so highly valued in Zen: the state of naïve, spontaneous and imperturbable lack of intention that is achieved by true masters only.

A Zen saying that echoes the Daoist approach of Laozi and Changzi states: The usefulness of a tea bowl is a result of its emptiness. 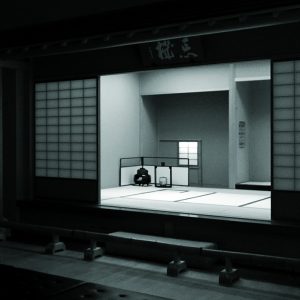 The tea room Bōki 忘機 at the Asian Art Museum Berlin was built by Japanese specialists and integrated into the exhibition rooms of the Japanese art collection in 2000. It measures ten tatami mats (tatami mats of about 180 x 90 cm are a traditional Japanese unit for the size of rooms). The adjacent preparation room (mizuya 水屋) serves for washing and preparing the utensils used in the tea gatherings, another room allows for the storage of larger utensils. A sunken hearth for the water kettle is used in the winter season for heating water. The alcove (tokonoma 床の間) is decorated with items from the holdings of the museum. They are exchanged on a regular basis, always according to the respective season

The conscious being-in-the-present carries with it that great attention is paid to the individual seasons: in the selection of the calligraphy scroll and the tea utensils, in the arrangement of the tea flowers, in the shape and color of the sweets offered, and in the particular details of the procedure. In studying tea, too, we only ever practice forms that are in accordance with the current season.