Chanoyu (The Way of Tea) 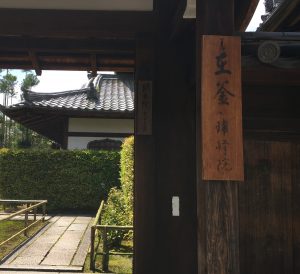 A guest once asked the tea master Sen no Rikyū to explain the use of the fire place and the water kettle. He was interested in learning about the correct attitude and the essential aspects of preparing tea in summer and in winter.

Rikyū replied: “In summer, aim for creating a sense of coolness, in winter one of warmth. Arrange the coals in such a manner that they will heat the water, and prepare the tea so its taste is pleasant. That is all.”

The guest was dissatisfied with this and commented: “Everybody knows that.”

Rikyū answered: “If that is the case, try acting in accordance with it. I will be your guest and may even become your student.”

[As recorded in the Nanpōroku 南方録 from in the late 17th century, about 100 years after the death of the master.]

The custom of drinking tea with its specific forms was introduced to Japan by Japanese monks who had spent years in the Zen monasteries of Song-dynasty China. It quickly spread in Japanese temples, and subsequently also among the court nobility, the samurai, rich merchants, and finally among the general population. Deeply inspired by the Zen approach that regards many everyday activities as forms of meditation, various tea masters of the 15th and 16th centuries developed the ritualized form of preparing, serving and drinking tea that is still in use today. In doing so they fused Buddhist contemplation techniques with Confucian etiquette and cosmic ritual, Daoist philosophies of Yin-Yang balance and Shinto purification rituals.

A preliminary high point of the development of the Way of Tea was reached with Sen no Rikyū. He was the personal tea master of the warlord Toyotomi Hideoshi who reunited Japan by force after more than two centuries of fragmentation and civil wars. Rikyū’s influence was decisive in imbuing the Way of Tea with Zen-inspired spirituality and simplicity. To this day several Japanese schools of tea, including the Urasenke, trace their lineage back to Rikyū. Tragically Rikyū, for unknown reasons, incurred the wrath of Hideyoshi and on his orders had to commit Seppuku (ritual suicide) in 1591 at the age of 69. 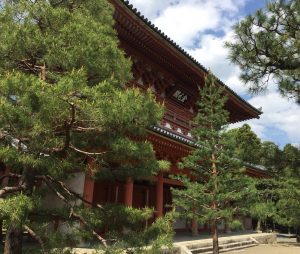 Even though Confucian, Daoist, Shinto, and possibly even Christian thought all entered into the Way of Tea, its essential spirit is that of Zen Buddhism: 茶禅一味 (chazen ichimi), it is said, “Tea and Zen have the same taste.” In the war-torn era that gave birth to the Way of Tea the awareness of the inescapable transience of human life was ubiquitous. Ritual tea gatherings therefore celebrate the unrepeatable present moment. In the face of our mortality they pay homage to life and its beauty.

In accordance with the practice of Zen there is no other-worldly platonic ideal in the Way of Tea, only ever this very concrete event in the present. The Way of Tea focuses on attentively experiencing this moment in its physical and spiritual presence, not on reflecting on it in a temporally or emotionally distant manner. Absolute mindfulness, care and concentration is bestowed on every detail of the process.

An old Zen saying that expresses this with direct simplicity is often found on the scrolls in the alcoves of tea rooms:

The Way of Tea 茶道 (read sadō or chadō), also known as chanoyu 茶の湯 (literally: hot water for tea) is a spiritual path that in embracing strictly defined external forms trains inner posture, presence of mind, attentiveness and concentration. It teaches us to do everything we do wholeheartedly and with dedication. Overcoming the limitations of our ego in accepting its forms leads to a deeper kind of freedom beyond selfishness and vanity. At the same time the Way of Tea effects a comprehensive sensitization of our aesthetic perception.

The spirit of the Way of Tea is expressed in the four principles formulated by Sen no Rikyū:

The world has changed fundamentally since the 16th century: the culture we live in today is completely different from that of medieval Japan. Why still follow these old forms? Perhaps because we sense that the mounting restlessness and pace of our real, virtual and electronic environments threaten to overwhelm and sweep us away. It is becoming increasingly difficult to stay the relentlessly swelling tide of ubiquitous distractions. But the louder the clamor surrounding us at all times, the more our experience of the world is mediated by screens and other technical devices, the deeper we feel the need for silence, contemplation, dedication, true communication and living presence.

In the hubbub of everyday life the Way of Tea offers us a place of respite, a conscious pause for breathing, a site of spiritual purity and shared presence. It shows us the way back to the immediacy of life here and now.

喫茶去 Kissako — Let us first share a bowl of tea!